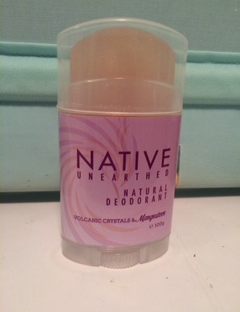 I think it would be fair to say that every vegan knows the struggle of trying to find a good, reliable but most importantly NATURAL deodorant. I have to admit, I have not had much luck to date. I have tried several from various health shops and had varying results. Let’s face it, if there’s one thing you need to be able to rely on, it’s your deodorant!

So when I was offered the chance to review Native Uneathed’s Natural Crystal Deodorant with Mangosteen, I was only to happy to oblige! As a vegan and general “anything natural” lover, I wasn’t too worried about what this product might look like as long as it did the job – but for those who may be a little more concerned with aesthethics, you will be pleased to know, it looks like any other stick deodorant you would buy on the high street. In fact, it’s quite eye catching with it’s bold lettering and clear lid. I really liked that you can see the product immediately. The difference between this product and normal high street deodorants of course is that this one is completely natural. Native Unearthed is a crystal deodorant infused with Mangosteen which is a unique fruit bursting with antioxidants, nutrients and vitamin C. The Mangosteen fruit  contains a potent concentration of Xanthones, which are one of the most powerful anti-oxidants ever discovered and is also known for its anti-allergic and anti-inflammatory properties and has been used for centuries in the Far East. Sounds too good to be true right? Think again…..!

The first time I applied this product was in the morning, after a shower and before a normal day at work (which actually turned out to be quite manic!). The instructions are to wet the stick slightly before applying. It glides on very easily and really didn’t have a scent of it’s own, which for me isn’t a problem at all because we all know other deodorants are artificially perfumed anyway and that’s definitely something I try to steer clear of as much as possible.

I will admit I did do a quick “armit pitstop” around lunch time to see how the deo was faring and I have to say, there was no odour! I was quite surprised since, as I said, the day did turn out to be quite fraught and there was a fair bit of running around!

The same applied when I got home. There was no odour at all and I was really happy with the product’s performance, as I continue to be as I am still using it on a daily basis. It is worth noting that this deodorant is not an “anti perspirant” so it wont actually stop you sweating. What it does do however is it leaves an invisible layer of natural minerals on your underarms which works around the clock to prevent the build up of odour causing bacteria. I am not a very sweaty person naturally so this is no problem for me. Perhaps if you sweat quite a bit, you may notice wetness more than with an antiperspirant but to be honest, I always think supressing your body’s natural processes with things like anti-perspirant can’t be the greatest of ideas.

At £6.49, I believe Native Unearthed’s Natural Crystal Deodorant is well worth it’s price and having used mine for several weeks now, I can tell it is going to last me months!

Get yours online or at one of the stores shown here

This sample was sent to me free of charge through the blogger review service of the VEGAN lifestyle ASSOCIATION. I have not been paid for this review and it is my genuine and unbiased review of the product.